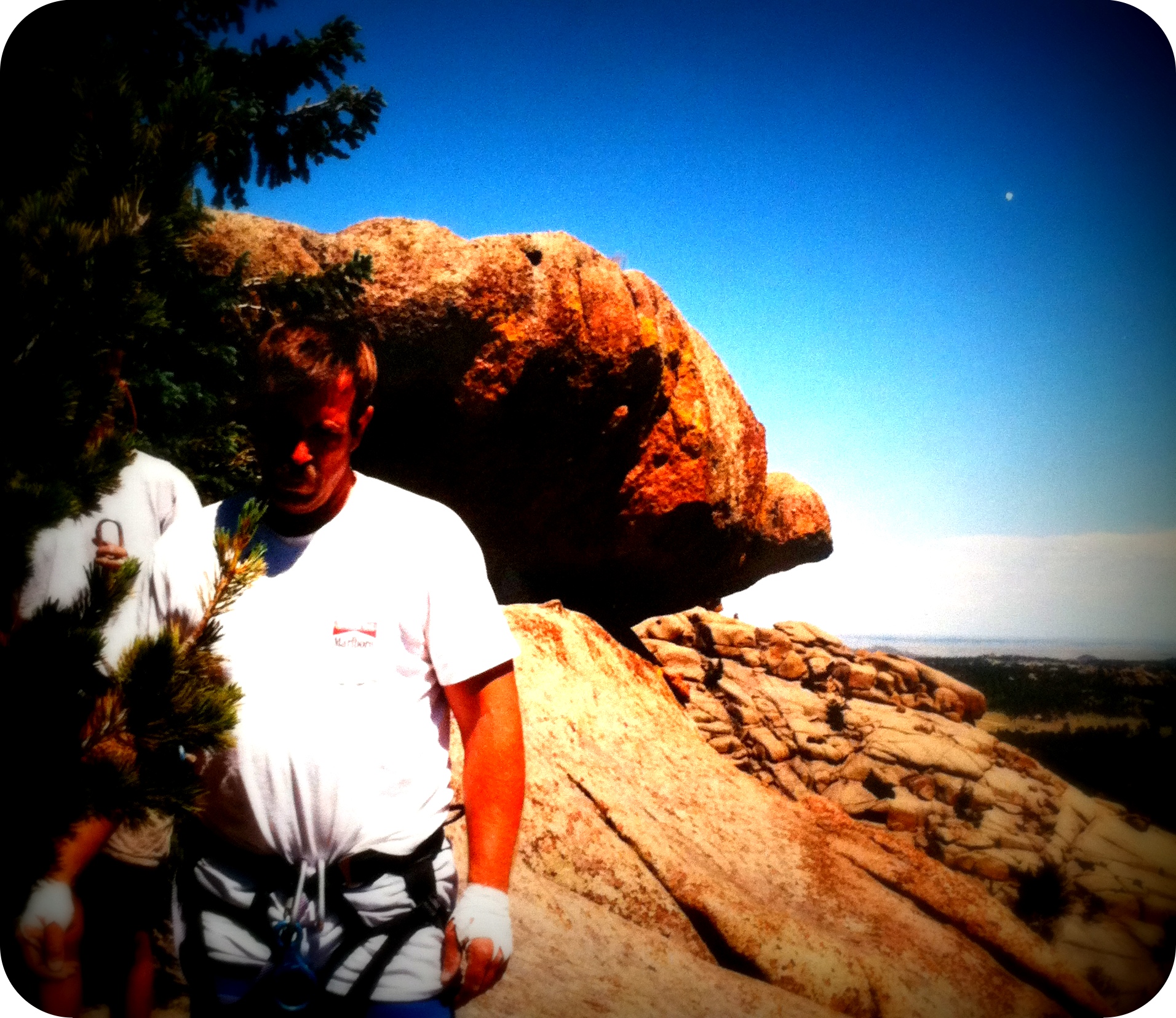 The fifth post in The Education of a Writer (TEW) series.

Three men in a small boat crossing a rough lake. Me, a close friend, and my step father. Massive granite spires cast their shadows on us, the lake, the world. All three of us knew we were ferrying my step dad to his death. That when we reached the opposite shore he would be dead.

We planned a two-week cross-country trip to climb our way through Colorado and Wyoming, capping off our July journey with an ascent of the Grand Teton. It was a doomed trip from the beginning. The morning before we left I discovered all of my money disappeared from my bank account. My girlfriend offered to front me the money.

Me, my step-dad, and my girlfriend swooped through Colorado and south-east Wyoming. There were bad vibes at every level. I read Dostoevsky in a humid tent. Brooded down roads covered in red dust. Fussed about the ever-present horseflies. Sulked on the edge of cliffs as I belayed my partners.

I was perhaps at my lowest point in my life in terms of who I was and what I wanted to accomplish. I looked to this trip to help mark my place in the universe — to climb in such a way that made evident my glory. The sad thing was the climbs were routine beginner stuff. I was just getting a ticket to the show. My arrogance was rife.

We eventually arrived in the Tetons and met our other climbing partner. The first two days we climbed easy routes. On the third day we made an attempt on Symmetry Spire. My girlfriend bailed during the hike. She was exhausted, and headed back to the cabin.

We had to skirt a couloir to get to Symmetry Spire, but because we didn’t have the right gear (crampons) it took us nearly three hours — not good. We needed to be done with the climb by early afternoon or we would get caught in a thunderstorm. And that’s exactly what happened.

We were 100 feet from the top when the dark clouds rolled in and started to rain. I wanted to finish the climb, but the other two wanted to rappel.

Rappelling is the most dangerous part of rock climbing. You are entrusting your weight on the rope, the anchor. Pray to God it holds. Fine, I said, and set our anchors in a huff and descended first. I did this once or twice until we reached a point where I draped a tether over a horn and then dropped a smaller anchor into the rock for back up. I dropped down the 40 feet to a ledge, unclipped, shook the rope, and yelled, “Clear.”

John, who stood at 6 foot four inches and weighed 280 pounds, busted the horn the moment he weighted the rope. He screamed as he plummeted the 40 feet to the ledge I sat on, clipped the edge, went silent, and then disappeared, falling the remaining 200 feet.

James said, “Get a grip. We still have to get down.”

It was James’ maturity and meticulous work that helped us rappel the remaining 200 feet because I was a basket case. If it weren’t for James someone would’ve had to carry me out of there.

James backed up — and triple-backed — our anchors. We left hundreds of dollars of gear on that wall as we descended. Our rope was getting shorter and shorter as we cut it for tethers. I kept looking to James, hoping he would tell me John was not dead. That he would be alive when we reached the bottom. We hardly spoke.

What’s important to this story about writing is that I asked God to get me off that cliff … and if he did I swore to get serious with Him and with my girlfriend.

It was another eleven hours before my girlfriend (keep in mind she knew someone fell, but didn’t know who the whole time) and I were reunited. It was the first time we told each other we loved one other. I called my mom and told her her husband was dead. She wailed.

The following morning I lay in a cot in our cabin and received visitors. I didn’t lift my head from the pillow and only offered  a limp hand and hello.  In the afternoon I wandered into the resort library, fumbled with a few books, but couldn’t read. The next day I listened to a psychologist from the Teton National Park, enjoyed her questions, smirked at James’ answers. My mom and one of her sisters drove out to meet us, and we eventually drove home to St. Louis.

On my grandfather’s balcony I then penned the poem I opened this post with. I was twenty-five and still a terrible writer. In fact, my daughter, who is eleven years old, could’ve written circles around me. Looking out over the humid valley dotted with homes I was dogged by the threat of obscurity. That my flame was about to go out.

What was I going to do now? What did I want to do? I really didn’t know anything except that I wanted to write. And I wanted to write poetry. So I wrote the poem about John’s death. I don’t know where the poem is to this day. It doesn’t matter.

From the encouragement of my girlfriend, aunt, and mom, I began to look to complete my college degree in a program like English Literature — a program that demanded I write a lot. I could live with that. Perhaps that is how I would make my mark.

John’s death was a pivotal moment in my life. A ground zero event that distilled life to its essence. Was I going to continue to avoid writing because I was afraid of failing? Of being ridiculed? It didn’t matter. I couldn’t go on with my life any other way.

My wife jokes that I don’t take a hint. She’s got a point.

Next up: “The Only Person Who Told Me Writing Was a Gift.”