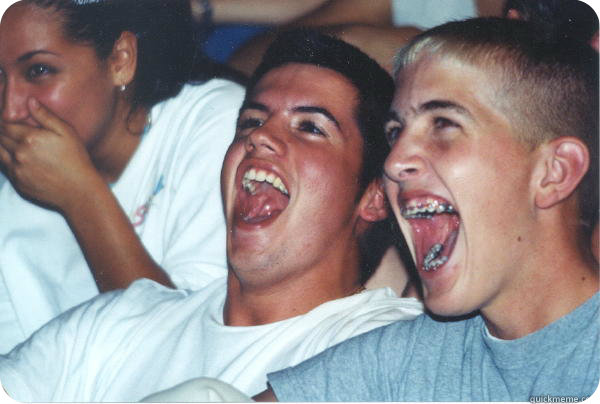 And the rules for writing persuasive copy remain:

Now I want to offer a new one.

Before social media entered the stage a marketer’s job was two-fold: write a compelling landing page and drive traffic to that landing page.

The internet has changed all of that.

An idea that takes off is a meme. Often the most popular memes are silly and juvenile.

For example, a reddit user named TrentonJ took the above photograph (six years after it was originally published), added some profane text and then submitted it to the subreddit /r/AdviceAnimals.

With just 278 upvotes in 27 days the photo failed to reach the home page. This was not a successful meme.

Twenty-six days later TrentonJ tried again. He changed the text (added even more profanity) and re-submitted the photo. This time it reached the front page with 13,850 upvotes in 48 hours.

That’s huge. But not as huge as the Overly Attached Girlfriend.

Young woman responds to a Justin Bieber singing contest. Her song signals a clingy, stalker-like lover — an overly attached girlfriend. She parks her video on YouTube, someone shares it on Reddit, and in less than two days it was viewed nearly 1.4 million times.

It’s this sort of monstrous influence that social media has on content that convinced Atlantic Monthly to abandon all serious efforts at SEO. Their editorial strategy is to increase the viral chances of each article by running their headlines through three layers of editors.

They don’t even invest in an SEO-friendly title.

And the headlines you see at the Atlantic Monthly site will probably be different from what you see shared on Facebook or Twitter. They are trying to find the most popular and shareable headline variation.

Long ago discovery by search was dominant. No longer. Now, discovery by social media rules. We let content come to us via our friends and via our social networks (for instance, people go to Reddit to discover the “news”).

Think I’m floating smoke up your skirt? Google buys into the social-media-dominates premise, too. And it proved as much by launching Google+ and authorship markup. No serious online content marketer would be without either.

Which brings me back to the influence social media has on persuasive copy.

A Brief History on Copywriting

The job of the online copywriter is to attract attention, stoke interest, create desire, and incite action.

Attracting attention used to be concerned with stopping the reader dead in his tracks. A good headline will do that.

Before the web — in the world of print — advertisers bought space in magazines and newspapers. Naturally, promoting an ad in spaces with high volumes of traffic would increase the number of times eyeballs saw the ad.

This meant the front page, back page, inside front and so on.

In the early days of the web the sales letter was static. It sat on a page off of your website. You drove people to it by banner ads and email. It was all about pulling people to your message.

Then along came social media and the meme. You don’t have to pull people to your idea any longer — if it is good people will spread it for you.

Eventually companies began to adopt the meme approach to promotion. Every one remembers the Cadbury Gorilla, right? What about Burger King’s Subservient Chicken?

Both examples of successful viral marketing.

More than likely you saw both of those promotions because you saw it in your Twitter or Facebook stream. Or someone emailed it to you. Or maybe you heard about them at the water cooler and then jumped on online when you got back to your desk.

But are those promotions good closers? Did they results in more sales? Did they take that attention and turn gawkers into clients?

This is where the online copywriter comes in.

Granted, very few ideas are going to turn people into customers on the first try. The complexity and price point of your product will determine the length of the sales cycle. Simple and inexpensive products will have short sales cycles. Complex and expensive products, much longer.

But a great web copywriter will know not only how to make ideas attractive — but how to make them shareable. Clear, concise, and compelling is not enough. Copy must now be meme worthy.

Let me close by sharing with you some skills that copywriters must adopt or modify if they want to compete in an online world dominated by social media. Fortunately I could only come up with three:

Your turn: Can you think of any other relevant skills web writers need to adopt in this new world social media order? And where is my argument off? Am I making needless distinctions? Or am I spot on?

I would love to hear your thoughts. Brutal and all.