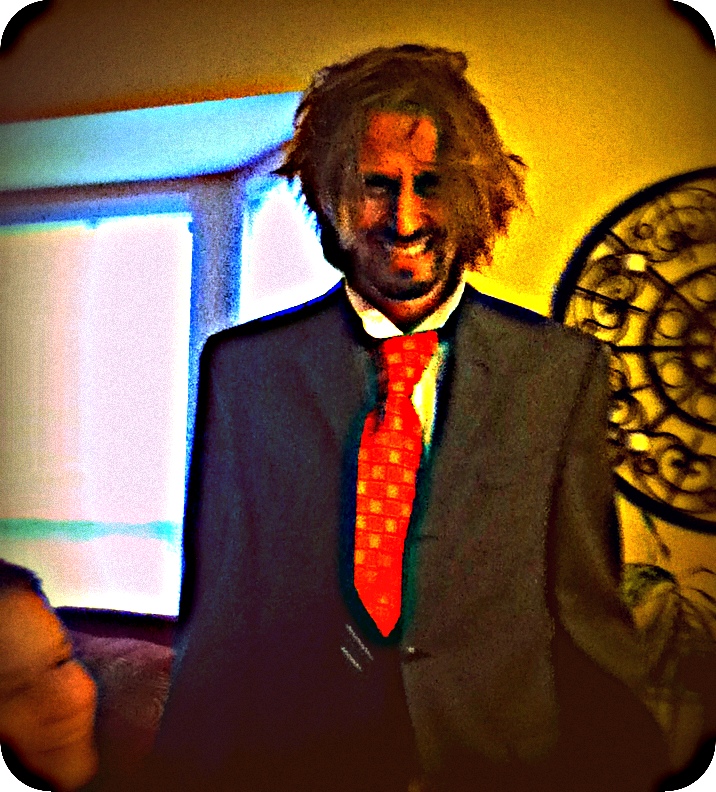 Let me mess with your head for a moment.

Let’s say he walks into a bar and sits down. He orders a scotch and waits.

The bartender asks him who he’s waiting for and he says, “Nobody. I’m taking a break.”

“A break from what?”

“From writing an ad.”

The bartender nods, polishes a glass and turns to put the glass away.

When the bartender turns back around there’s another man.

The stranger is nearly bald but what hair he does have is thick and white. Rimless, paper-thin glasses sit on the bridge of his nose.

The stranger orders a drink.

“Well, it’s that time of the year again.”

“Has it been that long?”

“Yes,” Nielsen says, pulling out a photo and showing it to Ogilvy.

Nielsen says: “Ours. His name is Demian Farnworth.”

Where I’m Going with This

A high-concept pitch lays out the entire story–premise, promise and execution–in a simple sentence. Here are a few famous examples:

There’s a number of things that high-pitch concepts do but one of the main things is it brings together two completely different ideas and then demonstrates in the short pitch why your idea is different from others.

Here’s Why You Should Care

The world of the web is flush with web writers.

So to demonstrate how I differ from the pack I package it this way: “I’m David Ogilvy and Jakob Nielsen’s bastard son.”

Of course that needs some unpacking [which I’ll explain in a minute.] But it’s bold. Different. And gets people’s attention.

Isn’t that what you want to do with the things you write online?

When it comes to getting attention, out the window are the flatteries. In the trash are any complicated, detailed plans.

And you need to sell your idea so it sinks them right in the gut.

The same is true for writing web copy.

You need to round-up and compress into a tiny amount of space a ridiculously compelling idea.

Because the space isn’t getting any smaller.

Your headline, tweet, subject line or blog tagline–they are one among a billion.

People do not know you and don’t want to know you unless you give them a good reason.

And getting people there isn’t enough.

You’ve got to woo them once they’ve found your site. You’ve got to get them to do that second look. Here’s 5 ways to do just that with the high-pitch concept.

Originality counts for everything. The plot line for The Sixth Sense is a good example: “A boy is working with a psychiatrist because he can ‘see dead people’ and it turns out his psychiatrist is a ghost.”

But you really don’t have to work that hard. Pulling from previous ideas and adding a little bit of a twist is also a fantastic way to write compelling headlines and seductive email subject lines.

Take your favorite story, movie or ad and put a unique spin on it.

In the ad business, just about everyone has used and abused John Caple’s famous “”They laughed when I sat down at the piano, but when I started to play!” or Max Sackheim’s “Do You Make These Mistakes In English?” as a template to write a headline.

Pillage the bank of past creative work, warp it to work for you and watch the response.

It’s important that you don’t forget about your audience. Know who you are speaking to.

What are they reading? Watching? Listening to? Can you tap into their preferences? Their fears?

When you’ve landed on that fabulous idea, the next question you have to ask yourself is this: will this attract a wide or narrow audience?

If narrow, work on your idea until you can widen it’s scope. Once it’s as wide as you can get it, promote it.

Imagine a scenario where someone undergoes a procedure that erases memories from his mind. Eternal Sunshine of the Spotless Mind.

A happy man discovers his life is a complete fake. The Truman Show.

Or David Ogilvy and Jakob Nielsen meet. And have a baby.

That’s opposite. Stunning. Frightening. And intriguing.

Finally, this is the exercise that brings it all together. It’s a fabulous way to help any email, blog post or story take on a unique perspective. Take your idea and start asking “What if?”

What if a commercial jet crashed on a remote island in the South Pacific and the survivors tried to cope? Lost.

What if a cowardly opportunist is the member of a British family dynasty present at many significant periods and places in British history? Blackadder.

What if a sarcastic comedian puts movie stars in the hot seat on a cheesy stage? Zach Galifianakis’ Between Two Ferns.

What If David Ogilvy and Jakob Nielsen Had a Baby?

You’d have someone with the ability to write seductive stories within the boundaries of good usability and search practices. In other words, you’d have some uniquely suited to overcome the two almost-insurmountable problems web content faces: obscurity and neglect.

When I say obscurity, I mean web content is buried beneath billions of web pages.

By neglect, I mean if someone actually finds your page, they’ll more than likely ignore it or abandon it.

So how do you overcome these two problems? You or your writer has to write web content that search engines can easily find and people can’t resist.

That’s what the bastard son of a union between Ogilvy and Nielsen would be uniquely born to do. And using high-concept pitches would be just one of his many tools of the trade.