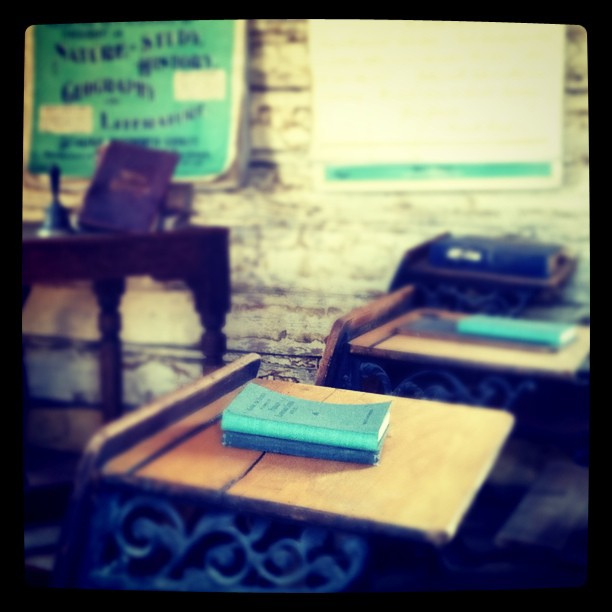 The twentieth post in The Education of a Writer (TEW) series.

I graduated from college in 2000. Freshly minted diploma, I knocked around the idea of going to graduate school. And then from there pursue advanced work. My dream was to teach on the collegiate level and write bad poetry on the side.

However, after three years of making very little money while in college–most of it made by my wife who slaved away while I wrote essays on John Berryman–and a desire to raise a family, we put graduate school on the back burner.

And there it sat gnawing away at me for a long time.

To make cash I fell into a job that introduced me to marketing. My boss handed me Cialdini’s classic Influence  and told me I had to read it. I turned my nose up to it and cracked it open only because I’d finished my chapbook on French poetry.

Almost instantly I fell in love with the book and everything marketing. It was a good gig. But the idea of graduate school never went away.

Each year my wife and I would bat around the idea of going to graduate school, asking the question, “Do I go after a practical program like marketing research or something academic like modernist literature?”

I found both interesting but  lacked a sustaining passion–the fuel that would carry me through the hard work school required.

This was the pattern for the next twelve years. Until Christmas 2010.

The Diary I Finally Decided to Read

Late winter 2010 is when I decided to read my dad’s cancer journal, a diary he decided to keep when he found out he was sick. He wanted the diary to serve as an inspiration to people who would be battling cancer in the future and hope to beat it like he was about to.

Because I knew the outcome of his disease, I could never bring myself to read his journal.  It was dramatic irony at its best. The journal sat unread for the next six years.

When we moved, it got packed up and shipped to our new house, shelved and left alone. However, for some strange reason I can’t recall, last winter it occurred to me that my father wrote that journal to be read–no matter the outcome. So I decided to read it.

I read all 64 handwritten pages in 3 hours. You didn’t even have to comprehend what he wrote to see that he deteriorated during that 12 month stretch. Just skim the pages and his handwriting alone told the story. From clear, well-defined cursive to shaky, illegible scrawling, he was not going to beat the cancer. In fact, about six months before he died he stopped writing in it. He was too sick.

Here’s Why I’m Telling You This Story

My father finally achieved his life-long dream of teaching on the collegiate level just two years before he died. In other words, he was only healthy for about six months of his teaching career. The obvious epiphany for me: do not wait until it is too late to pursue your dream.

So I decided to go to graduate school.

In a rather intense, near-compulsive two weeks of brainstorming and research with my wife, I scratched off marketing research from my list as well as anything remotely smacking of English Literature and decided to pursue a program in exegetical theology. [Why I chose this path is another story. Sorry.]

To make a long story short, the very first class I had to take was biblical Greek. In the summer. And in less than six weeks.

Yes, this was an accelerated course.

It was a sixteen week course boiled down to five. We met Monday, Wednesday and Friday from 8:30 am to 12:00 pm. But we didn’t just repeat our lessons in front of the professor, slap one another’s backs when we got it right and bat our eyes at the beautiful complexity that is biblical Greek.

Instead, we memorized 40 to 60 vocabulary words and 4 to 6 memory paradigms for each class. Cruised through three chapters each day. And struggled through the required exercises.

On the first day of class our professor handed us our syllabus. It read: “Work is not recommended.” Meaning, you should not have a job during this time. That was interesting. And impossible.

I walked away from the first day dizzy and discouraged. I pride myself on succeeding in the classroom. I’ve always done well in it [that’s why I’m an intellectual snob]. But  biblical Greek did a number on me.

Each day we took a quiz on the material from the last class. My first quiz I was sure I bombed. The same with the second quiz. Turns out I squeaked by on both, just in time to get manhandled by my first exam.

This is no lie: I studied for nearly seventeen hours straight for that exam. But that didn’t stop me from walking into the classroom seriously concerned about the outcome.

Memorizing and regurgitating the definition of vocabulary words proved easy for me. It was the declension of nouns and parsing of verbs that killed me. The complexity of these two activities would take an engineer’s analytical bent to succeed–not a dreamer fascinated with bad poetry.

Turns out I got a low C on the exam. My mate who sat next to me actually was a former structural engineer. He got a low A and was still disappointed. I did not punch him like I wanted to.

I marched to the professor’s office, threw my book bag to the ground and said, “We need to talk.”

We sat down in his book-lined, smallish office and talked. I told him I was concerned about my grade. This was an aggressive course. Things were happening fast. I needed to be as proactive as possible [if I wanted to recover some tuition]. When should I throw in the towel?

He said not to throw in the towel. Yet. A low C was passing…but that was the easy exam.

I slapped his knee and guffawed.

He then said we should wait until the second exam, see how I do and then evaluate our next steps.

What we’re my next steps?

The pilot program, which meant I switch to auditing the class and take it again in the fall [free, of course]. The purpose of this program was to allow the 15% of students who struggled with biblical Greek to gain more exposure to it. I fell into that category.

Unfortunately, I didn’t make it to the next exam, even though it was only six days away. Why? The preceding two quizzes demonstrated that biblical Greek was more than I could handle right now. But to be honest, after force-feeding myself two-months worth of this dead language in two-and-a-half weeks, I was sick of biblical Greek. I didn’t want to see another omega for as long as I lived.

I bailed. I told my professor I was done. I said I did not want to join the pilot program. I said I was re-evaluating everything about graduate school. He offered some sound advice, we shook hands and that’s the last I’ve seen of him.

What I Learned from My Fist Fight with Greek

My wife called this period the “dark days of Greek.” I was a monster. All I did was study, work, sleep and bicker with anyone who stepped into my office. It was awful. And taught me a lot.

Matt Cutts from Google has a great little TED talk video on trying new things. He recommends devoting 30 days to trying something new that interests you. He did it with a number of things: writing a novel and exercising, for example.

That’s exactly what I did. Only it didn’t take me 30 days to figure it out. It only took me two and a half weeks. That two and a half weeks, and the wee bit of tuition I couldn’t recover, was an investment in a short little lesson: I got graduate school out of my system.

It was a humbling experience. And trust me: it was a leap to shift gears and attend school. But 12 years was a long time to wait to see a dream come to fruition [that it died in less than a month is not important.]

Here’s the deal: I love to learn. And somehow I’d gotten it into my head that I needed the graduate credentials to succeed. However, from this side of graduate school I say, “You can have your credentials. I’m going to go write some bad poetry.”

Tell me about a time you pursued a life-long dream, made it happen and found out you didn’t want it. Ever have a dream dog you for a decade or two? What did you do about it? What do you do when you fail? Leave your comments below. Brutal and all.

Next article in the series: “The Creative Freelancer’s Guide to Melancholy”