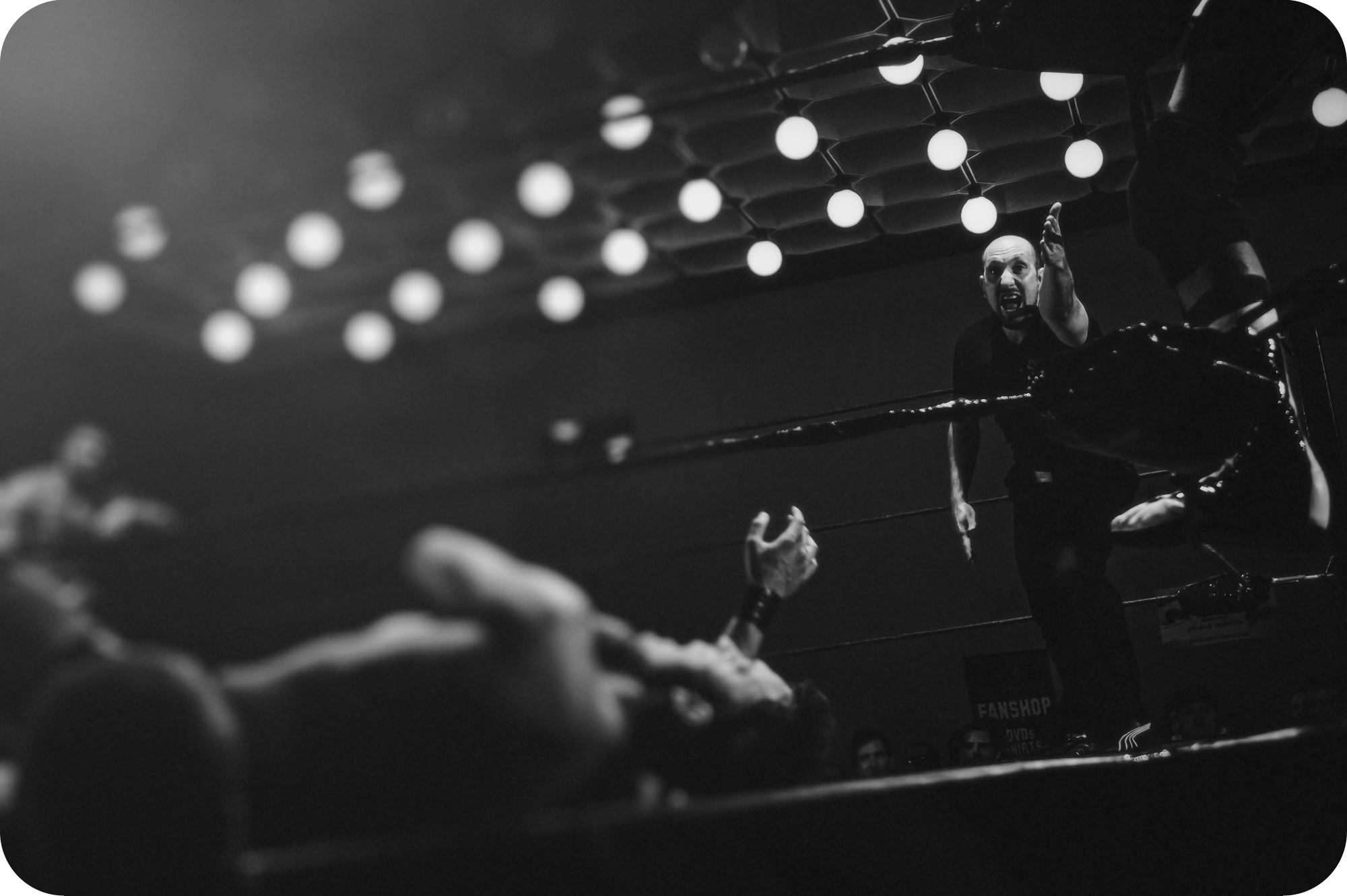 The eleventh post in The Education of a Writer (TEW) series.

This is how the fantasy goes down.

You sack my sister’s room, demolish dad’s garage, take the entire house by storm before kicking me out of my writing chair. I hit the floor (near the potted baby orange) with a groan.

You press your boot into the nape of my neck and lure black birds in through the open windows like it were Aventine Hill, my parents the Latins, and you the Roman emperor Ancus Marcius … a crippled arm waving in the air.

That’s the long-running fantasy. The one about suffering. As a writer. Culminating in something like this …

After the mob of black birds lower their chatter to a dull roar you bend down near my ear and bark, “Did you write this?”

You are waving four sheets of stapled paper in my face.

“Then you should be ashamed of writing such a short sales letter, champ. Tsk, tsk,”  and punch me in the face.

I needle the blood on my busted lip with my tongue.

“And whoa, where are the benefits, buddy?” and punch me in the jaw.

“Now … here … here, I do admit this was a good string of reason why copy, old boy. A good string, indeed,” and deck me in the eye.

Listen, this fantasy has nothing to do with a lack of self-respect, but a preferable aura of brutality in writing, in everything. A sadistic attitude towards productivity. In other words, you don’t truly create unless you suffer.

It’s an entirely romantic vision I confess. But think of it as the Fight Club method to feedback.

Where did this love for suffering originate? I don’t have a clue. My childhood was void of any real suffering. No abuse, no unthinkable work conditions, no lack of basic human needs like corn dogs, clean jeans, or toilets.

About the best I can do is unearth a wee bit of advice my biological father (the one who died of lung cancer in 2005) shared with me. It occurred in my early teens, while he was on leave from the Air Force, at my grandfather’s above-ground swimming pool. He said:

That which does not kill us makes us stronger.

We all know he was quoting Friedrich Nietzsche. I have no evidence, however, if he read Nietzsche or simply picked up that aphorism the same way everyone else does … from popular rap songs or paperback self-help books.

Didn’t matter. It was a perfectly appropriate piece of advice coming from a man who considered affection rather … unsuitable for men. He was a thorough Spartan.

Yet, that advice embedded itself in me, yeah, because, call it my disposition, I admire all things self-denial: the Opus Dei practice of self-flagellation (but never brave enough to pull it off), an occasional fast for no other reason than I’m a spoiled brat. (At most I could survive only 36 hours of a three-day fast of honey and lemon water  … yes, condemnation and despair followed.)

And so no surprise that a more recent piece of advice — one that comes from a discredited cycling champion — sits well with me also:

Those who suffer the most/longest win.

When I heard that statement my brain went off.

Can we twist that in on itself? Give it a writing spin? Can we make the writing career a long-distance dog sled race … where we are the dogs? Can we make it a gentlemanly fight club that meets in the church basement?

This is why the slug in the gut from John Carlton was a gift.

I’d never met the man. Only knew of him through an acquaintance. Never saw a picture (this was before John had a website). My guess, because of his unruly reputation, was that he was short, stocky … with a moustache, foul-mouth, and a Hunter S. Thompsonesque dirty streak about writing …

One hangover from rehab. One pound shy of Hell’s Angels. (John is none of these, by the way.) The perfect person to destroy me.

I wanted two things from John: bring me back down to earth and prove to me I’m the writing genius I am. Of course I didn’t consider the two goals mutually exclusive.

Hi John. You know me through my boss, Boom Tito. You had dinner with him. Any chance I can get you to look at a piece of copy for me? It’s short. Demian

Within minutes he responded:

Heh, I remember Boom Tito. Yeah, sure, send it to me. John

I wrote back, with the copy attached:

Give it to me straight, John. I want the truth. No matter how bad it hurts. Demian

Less than twenty minutes later, he replied. He sparred no punches. And nearly satisfied my long-standing fantasy.

His biggest beef was my impatience … my assumption that short copy would get the job done. My bad belief that readers would ignore long copy. He said I should be ashamed of myself.

I was an embarrassment to copywriting, to Boom Tito. My head drooped.

I had gotten the whipping I wanted. What more could I ask for? But I honestly wasn’t sure I could recover. Not only was I not a genius, but three years and this is the best I could do? It was time to throw in the towel.

But as I was reeling … hours later … recalling the email conversation to Boom Tito … it started to click. Everything I’d been learning … those lessons about focusing on the reader … about telling the full story … about building value though benefits … I started to understand.

John’s clock-cleaning number on me pulled back the blinders. He brought over three years of writing experience to surface in that one email. In that one moment of brutality…

But leave it up to me to take this aura of brutality to another level. I guess that other fantasy of mine — the one about my genius — was still a wee bit cocky.

Next up: “A Mildly Fabricated Narrative about My Time with a Critique Group.”