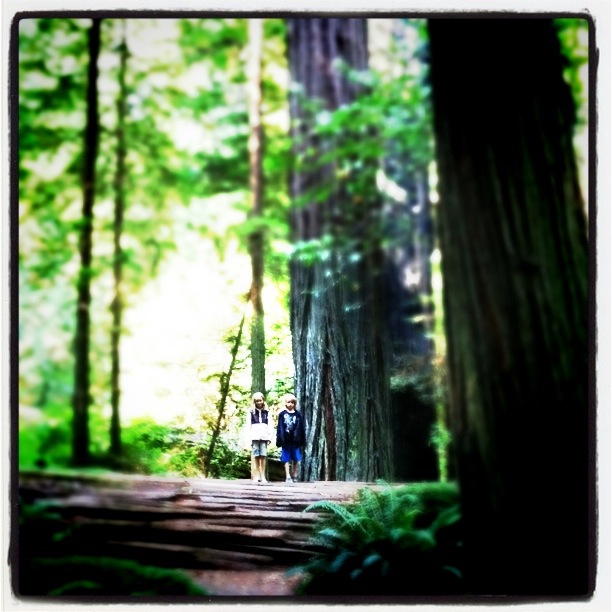 On the muggy morning of August 17, 2011, my family and I loaded up into a silver Impala, backed out of the garage and waved goodbye to our house and our neighborhood. Inside the trunk were five suitcases. Enough clothes to last us one, maybe two weeks.

Our plan was to be gone for five.

We headed north to Chicago, then west through Wisconsin and Minnesota, into South Dakota then Wyoming, Washington, down to Oregon into California. At LA, we turned east and drove through Arizona, New Mexico, Oklahoma and Missouri.

We bunked with friends in Rapid City for a week. We spent four days near Yellowstone. I drank the best scotch ale in my life in Missoula.

In Washington we ate like kings [thanks to my sister-in-law] and I tortured myself on routine runs through some rugged, steep trails in her backyard.

In Oregon we gawked at Multnomah Falls and stayed the night with my great-aunt and uncle. From there we snaked our way into California along the Pacific Coast Highway and lodged among the redwoods.

We spent two nights in Sacramento and three in Los Angeles, where the family hustled around Hollywood while I worked or tortured myself on the steepest hills I could find.

In the end we were on the road for over 7,000 miles in 32 days, crossing through thirteen states. Here are ten things I got from that experience.

Montana. Wyoming. South Dakota. Washington. Who wants to live there, right? Not me. At least not before I went on this trip and realized the magnificent landscape.

The alien-like Badlands. Towering Harney’s Peak. Crazy Mountain. Buffalo Bill Dam and Lake and the rising mountains. Clueless to these wonders in the west.

2. Renewed love for the outdoors

From an occupational and emotional stand point, I needed this trip. I was getting bogged down in work and the urban routine. Symptoms included snippy comments, dull observations about ROI and a fascination with organizing our basement.

3. A taste of the vagabond lifestyle

Drug runners. Fugitives. Celebrities. Flight attendants. Those were some of the personas I imagined our family to picture. People on the run. Never settling. Always on the go.

It’s a good feeling. Up to a point.

Living out of a suitcase, not to mention the never-ending pulling and pushing of those suitcases from the car trunk, wears on the nerves. I eventually wore the same clothes day after day because I was tired of finding clothes I could never really find–and washing them.

It wasn’t easy working, either. For one thing, it’s a little hard to work when you know your family is out exploring Yellowstone.

The other thing is Internet connections in some places was weak or non-existent. And I never really had a space to call my own. I’m a routine guy. And I like my space. More on this topic in future posts.

I got to see family [on their own turf] whom I haven’t seen in a long time. Great uncle and aunt and my wife’s brother and sister. Not to mention their children. People I adore.

5. Refined sense of awe for the ocean

Like I mentioned in no. 1, the mountainous terrain of the West stunned me. But California’s north coast, however, took the cake.

That relentless grey ocean heaving and crashing into that rough shore line inspires a sense that it is alive and emotional. A mountain awes you by it’s height. The ocean, by it’s movement. A movement that could kill you.

I like to run and believe running long distances is a great way to become a better writer.

I also like to run when I’m visiting new places because I can feel the landscape with my legs and lungs. It’s like a blind man running his fingers over a statue.

I put in a lot of miles [over 30 a week] during our trip. As a consequence of the altitude and the hills I got stronger. [Where I live it is flat.]

7. Reminder that life is about people

During a phone conversation with my mom I said, “This is God’s country.” I was at a loss to explain my sense of wonder with the landscape. We were in Trinidad, CA.

Without missing a beat she responded, “So is this,” meaning where she lived, which is in the middle of the Midwest.

She didn’t need to say more. I understood.

8. Discovery that I am insufferably moody

I think the disruption of my routine sets me back emotionally. That’s the only way I can explain my inexplicable sudden moodiness during the first week or two of this trip.

I have to admit: I’m moody to begin with. Being on the road amplifies that, which allowed me to see clearly how I hurt people during this moodiness…and then how I needed to cut it out.

Thank goodness for a gal who extends loads of grace.

9. More people should do this

I said in my Secrets the Cubicle Bound Can’t Tell You that I don’t believe everyone should work for themselves. I still stand by that statement.

I do think that everyone should travel for at least a month. Or longer.

In just one week you’ve barely gotten out of your old routines. You need to shed all of that baggage and wade into new dimensions of who you are and what is around you. Traveling extensively will do that.

10. Wyoming in the summer is full of wind and flies

If I was to move any where right now, it would probably be northwest Wyoming. The hills, the mountains. However, this area is possessed with a wicked wind and  fly population. Open a bottle of beer and within four seconds four flies will be at the mouth. No lie. The locals just live with it.

Ever been on an extended vacation–in the U.S. or around the world? Like to travel? Share your thoughts and experiences in the comments below. Brutal and all.